Home Everything Else Curiosities A ‘miraculous’ coincidence

For the series: “Life is a spinning wheel”, this story is truly incredible! A doctor who worked ceaselessly over 30 years ago to save the life of a premature born child was in turn rescued several years later, following a car accident, by that young boy (now a man) who he had managed to keep alive.

Fire paramedic Chris Trokey, who was given only 50 percent chance of survival, then returned the favour to pediatrician Michael Shannon. The latter had been stuck between the sheets of his burning SUV, after an accident with a truck in California. 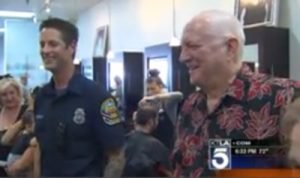 But thanks to the immediate intervention of Trokey, who did not know who the man was, the doctor survived.

… Once he arrived at the hospital, as soon as he heard the name ‘Michael Shannon’ the paramedic immediately understood who he was.

Chris Trokey and Michael Shannon in a still image of a video by the American broadcaster ‘Ktla’.