Home Everything Else Religion Ash Wednesday 2019: Here is the meaning of the celebration

Today, March 6th, 2019, is Ash Wednesday. The ritual of blessing and conscience of Ashes dates back to the tenth century and recalls the fate that awaits all of us. The priest recites in fact the formula: “‘Remember man you are dust and dust you will return“.

The ashes are obtained by burning the olive branches distributed on Palm Sunday of the previous year. The tradition places Ash Wednesday the day after the end of Carnival and the beginning of Lent, which ends at midnight on Good Friday.

With Ash Wednesday, Lent begins. A time of prayer, fasting and charity awaiting the Christian Easter. Its origin must be sought in the ancient penitential practice. In fact, it was the ritual that started the journey of penitence of the faithful who would have been absolved of their sins on the morning of Holy Thursday.

Over time, the gesture of imposing the ashes spread to all the faithful and the liturgical reform considered it appropriate to preserve the importance of this sign. Biblical theology reveals a double meaning of the use of ashes: as a sign of the weak and fragile human condition and how external sign of him who repents of his own evil action, deciding to make a renewed journey towards the Lord . As examples of the first meaning: Abraham, turning to God, says: “See how I dare to speak to my Lord, I who are dust and ashes”. Job, recognising the deep limit of his existence, with a sense of extreme prostration, says: “He threw me into the mud: I became dust and ashes”. 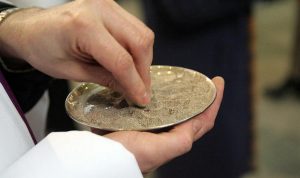 As examples of the second meaning, the biblical text of the conversion of the inhabitants of Nineveh is particularly well known, because of the preaching of Jonah: “The citizens of Nineveh believed God and banned a fast, clothed a sack, from the largest to the smallest. When the news reached the king of Nineveh, he rose from his throne, took off his robe, covered himself with sackcloth, and sat down on the ashes.” Even Judith invites all the people to do penance so that God intervenes to free him: “Every man or woman Israelite and children who lived in Jerusalem prostrated themselves before the temple and sprinkled the head of ashes and, dressed in sackcloth, raised their hands before the Lord”.