In spite of not being as well known as the Order of St John of Jerusalem that is normally associated with Malta, the Order of St Michael and St George also has an intriguing history.

The Order of St Michael and St George was founded by the British government simultaneously in Corfu and Malta in 1818 to acknowledge the service rendered by citizens of those countries as well as British officers employed in the Mediterranean. 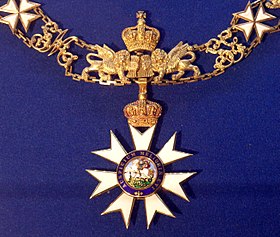 Many of Malta’s most respected citizens of the nineteenth and early twentieth century were appointed to the Order. Arch. Christopher Grech has spent many years researching the Order and was recently able to carry out research at the Central Chancery of the Orders of Knighthood in St James’s Palace, London. His lecture will examine some of the artistic works associated with the Order in Malta, from Pietro Paolo Caruana’s majestic paintings of St Michael and St George, to the regalia worn by members of the Order including portraits of members of the Order in the paintings of Edward Caruana Dingli.

Natalis Notabilis has been cancelled