Home Everything Else Technology The Lamborghini Aventador printed in 3D

It all started with a game in the Forza Horizon 3 video game . Xander Backus’ favourite supercar was always the same, the Italian pride Lamborghini Aventador. So, one day the 12-year-old asked his father: “Since we can’t afford it because we don’t make it at home?”. An absurd idea, typical of that age, but Father Sterling replied: “Why not?”.

And so the 54-year-old from Erie in Colorado made an effort and squeezed the potential of modern 3D printers to the maximum, producing piece by piece by himself until he assembled a practically perfect display copy of the Italian custom-made car.

Physicist at Thorlabs, mr Backus has always defined himself as a “Lamborghini guy” and jumped at the ball thrown by his son to realise a dream he had been carrying for some time. The project started in February 2018 and took several months before being completed with an accurate research and design phase of the model to divide the Aventador into many pieces like a puzzle to be then reassembled. 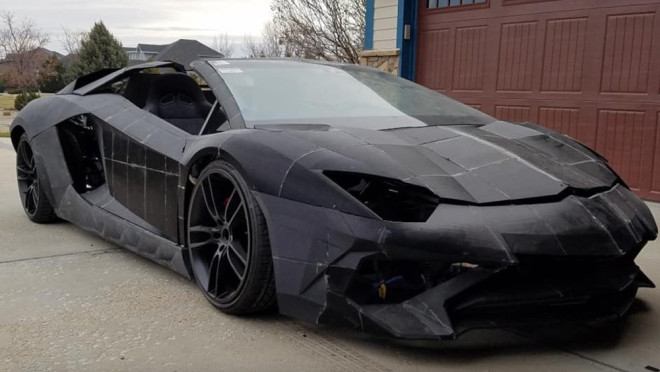 An official model of the car was taken as the basis and the Solidworks software was used, while three different printer models were used for the production of the bio-compatible plastic parts, but mainly the Qidi X Pro. resting on carbon fibre for more stability and steel (for suspension and frame). Tires, brakes and other components have obviously been bought separately, but no original engine as you can imagine. In total, the budget for this crazy and fascinating project was around 20,000 euros .

And the result is so surprising that the two were contacted by Lamborghini’s marketing manager, who asked to be able to shoot a promotional video with the passionate family, giving – in exchange – the opportunity to drive a real Lamborghini Aventador S with a value of over 400,000 euros for two weeks.