Home Everything Else Religion Watch: An Indian man saved after he was buried alive

An Indian man was saved a few weeks ago, with rescuers rescuing him from a grave in which he was voluntarily buried for 8 hours in an attempt to be “reborn as a god”.

Deeraj Kharol, who lived for a few years in a temple in the village of Karocho ka Kheda, in Rajasthan, announced last week that he had planned to bury himself alive as part of a bizarre ritual to obtain “samadhi” (salvation) and to be resurrected like a God three days later.

Instead of trying to make him think, the enthusiastic fellow citizens celebrated his decision and offered to help him in any way, even digging a grave for him near the temple. On the first day of Navratra, they buried him in the pit, as per his instructions. Villagers from nearby villages and villages gathered for the big event and, after covering the pit with stones and mud slabs, began to pray on the spot.

Fortunately for Kharol, the news of his ritual spread rapidly among the local community and also reached a regional police station, from which agents rushed to the village of Karocho ka Kheda with an intervention group.

When agent Mansingh Dev and his colleagues arrived at the pit where Deeraj Kharol was, they were greeted by protests from villagers who prevented them from interfering with the ritual. The police first had to convince the village elders that the buried man would die suffocated before the inhabitants finally allowed them to intervene.

Kharol was barely conscious when the police pulled him out of the grave. He was taken to a nearby hospital and is now in a stable condition. He later told the officers that it was his desire to perform “samadhi” and that the villagers who helped him were not to blame. An investigation, however, is now in chorus on the incident. 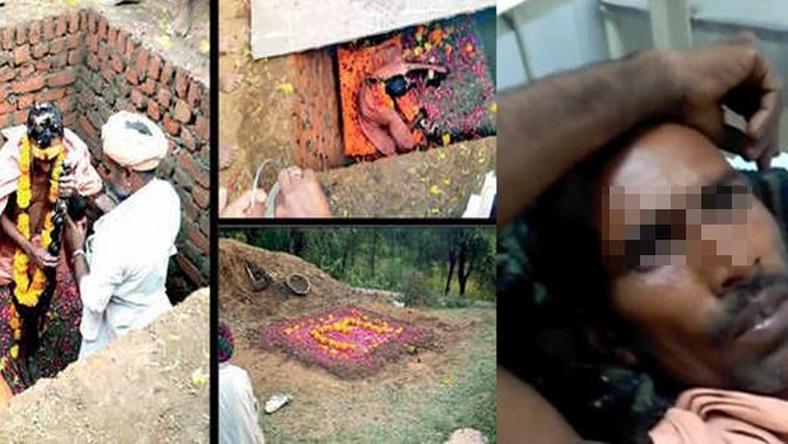